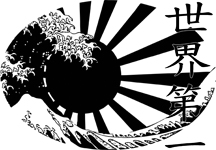 The Okinami (Great Wave) had been created by the Butokudden (the military corp that includes Meta-Human regiments and squads) following the example of German's Arischer Sturm, to be a symbol and incite Japan's militarist spirit. Its members soon learned how to cooperate with each other at their best, making the Okinami an impressive war machine. But they're individualists and psychological tests confirm that they will never forge any esprit de corps: none of them was ever proud to be a member of the Okinami.

Despite his young age (he's in his mid-twenties), Yashamaru Mizukiyo is considered the greatest living Shinobi. He's the KageMaru of the Village of Water, the youngest to ever receive the title, and he's classified as a Martial Warrior. General Nakajima himself (the general in chief of the Butokudden) wanted him as first member and leader of the Okinami. Yashamaru loathes going into battle with the other Okinami members instead than with the Shinobis of his village, but it doesn't affect his effectiveness and deadliness in mission. He's reserved and discreet, there's apparently nothing that can irritate him and he keeps his self-control in every situation.

Before being enlisted in the Okinami, Shinji Iwata was an old man running an antique store in Kobe. During his trades he acquired two bokkens (wooden swords used for training) belonged to the legendary Miyamoto Musashi. One day, unable to resist to the fascination for the weapons, he wielded them mimicking some fighting stances: the relics then unleashed their hidden powers making the old man their Keeper. Iwata is a peaceful man, with no fighting experience, but when he wields the bokkens, his body undergoes the transformation that turns him into Musashi Kensei, an unscrupulous, fierce, extremely skilled warrior, whose only goal is to prevail at all costs. When the possession ends, Iwata remembers nothing about what he did as an avatar of the Samurai.

Shodo Shonin was the legendary monk that founded Nikko's hermitage. According to the tales, he crossed the river riding two dragons and built the temple in that holy place. Kunta Takeo is an eleven year old boy that accidentally found the old monk's staff during a visit to the temple and he's the only one able to awaken its powers. He's the second Keeper of the Okinami, wielding Shodo Shonin's staff. When he wields the weapon, he turns into an adult man, well prepared and trained for battle and with awesome powers, ranging from the control of elements and water to devastating earthquakes.

Mikami Maeda is a Natural Prodigy or, according to Japanese classification, a Kami. When her powers became evident and she made use of them in public, she was chased away from her village and condemned to the solitary life of an outcast. During her travels, she happened to almost casually stumble on the hidden Village of the Void. Since all Shinobi Villages are shrouded in powerful anti-detection magics, it was pretty evident that Mikami had something in common with the martial arts of the inhabitants, or she would have never seen the truth of the place through the veils of illusions. One of the Shinobis of the village took her under his tutelage and gave her a formal training, honing the already outstanding skills of the girl in controlling shadows and turning them into deadly illusions and weapons. The Shinobi gave her the new name of Sakura.

Yomi is a New Cami, the equivalent of western Lab Prodigies. He's an Ainu (an ethnic group whose people are treated like outcasts by Japanese society and government, with little to no civil rights), his true name is covered by military secret and he was forcefully enlisted to test the Wunderkammer technology the Japanese acquired from its German allies. The mutation process was considered a failure at first, since he showed no peculiar powers nor physical changes. Some coincidences and accidents that took place at the Butokudden's training facility though, prompted scientists to test Yomi again, and it eventually became evident that he's maybe one of the most powerful Meta-Humans ever created in a Wunderkammer: he is able to selectively inhibit and temporary cancel any superpower in a radius of six thousand kilometers. Before being studied, his power caused the death of many other Kamis, this is why he's been called Yomi, which is the mythological “mysterious Land of the Dead”. 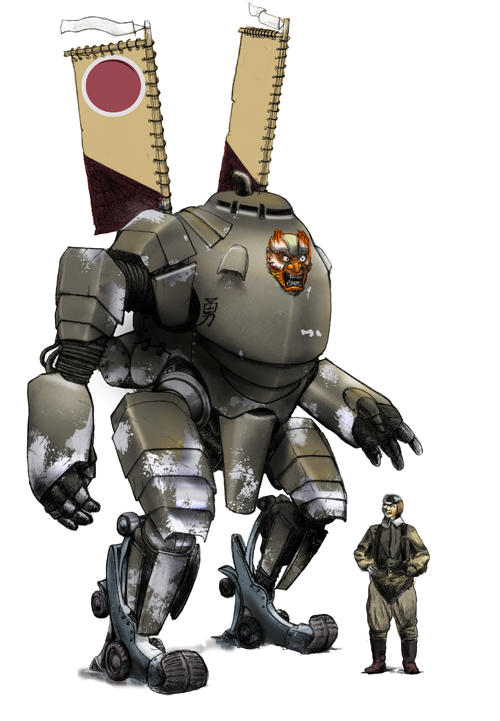 Daidara-bocchi is the name of a legendary giant of Japanese mythology, humorous, immensely big and extraordinarily strong. Daidara-bocchi is also the name given to the most advanced Kido Senshi (the dreadful Japanese mechanical armors animated by dark magic that laid waste to the US fleet at Pearl Harbor) piloted by Saburo Sakai, the most talented Japanese fighter pilot. His Kido Senshi is far larger than any other built so far and it's equipped with the most advanced technologies and weapons. Saburo was the first test pilot of the Kido Senshis and he's also the author of the "Crane's Kata", the training manual for Kido Senshi's pilots.