The Wuderkammern were created by Dr. Freida Weber, who theorised them during her formative years at University. Her studies concerning the superiority of the Aryan race were disputed by her teachers, and the debate that followed forced her to abandon the academy. The newly founded Nazi party, however, found her theories much more interesting. They approached her, promising financial support to allow her to carry on with her research – a promise that they kept after Adolf Hitler came to power.

The Wunderkammern radiate the test subject with the rays of the Black Sun, transforming his or her body and mind patterns and thus giving him or her supernatural powers.

Unfortunately, at least in the early stages, the procedure is unstable and quite often it ends with the death of the candidate.

When Jews, homosexuals and gypsies start being deported, Dr. Weber’s labs receive a growing influx of human Guinea pigs on which to experiment. With time it becomes more evident that some people are more suitable than others for those experiments.

The “Eureka” moment comes when Dr. Aaron Spiegelmann, a Polish man with Jewish origins, undergoes the treatment. His body withers and becomes deformed, his cranium grows beyond any imagination – but he is the first person to survive more than two weeks after the treatment. His mental faculties grow well above average, and seem to be constantly developing. 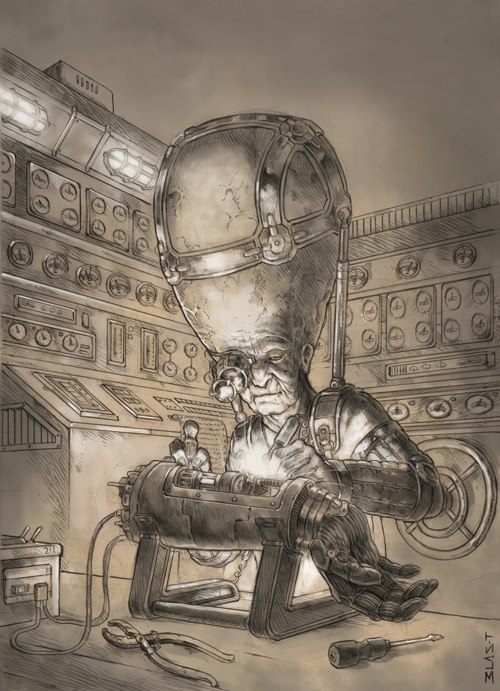 The Nazi charge him with the further development and the stabilisation of the mutation process, thus taking it off Dr. Weber’s hands despite her having personally originated the whole thing. Dr. Weber, filled with hatred, becomes convinced that Dr. Spiegelmann is plotting against the project itself. She finds proof of it when in the mutation chamber is brought Jürgen Cranigh, a mediocre soldier with dubious morality.

With a trick, Dr. Spiegelmann rushes Cranigh’s mutation without waiting for the Wunderkammer to cool properly, causing its explosion.

Cranigh, however, still mutates: the result is Fenrir, a blood-thirsty, brainless beast, incapable to tell friends from enemies.

To avoid Fenrir’s fury, Dr. Weber is forced to hide in the Wunderkammer itself. As Fenrir lays waste to the lab and devours its occupants, the mutation chamber is somehow triggered. The chamber explodes again, and from it emerges a new superhuman being, with unimaginable powers: Dr. Weber mutated into something that the Germans will call Brunhild.

The Axis just saw the birth of the two most powerful Meta-Humans in the world, but as it happened Dr. Spiegelmann managed to flee without a trace…